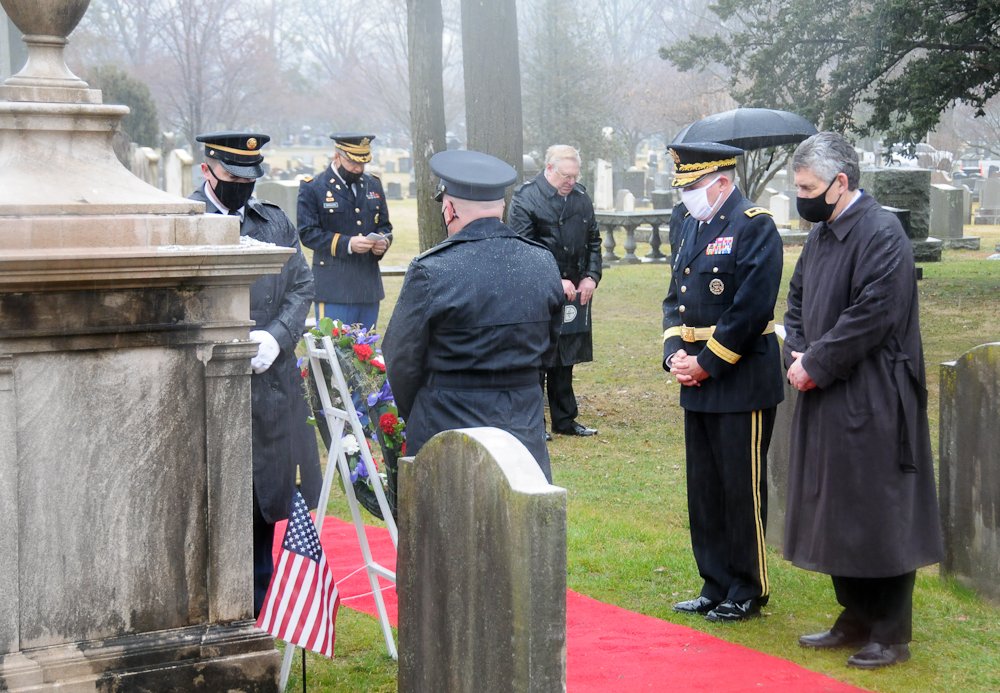 On a damp and chilly day, a handful of soldiers from the U.S. Army Reserve’s 99th Readiness Division, along with Princeton Mayor Mark Freda, gathered to lay a wreath at the grave of former U.S. President Grover Cleveland in the Princeton Cemetery.

The annual ceremony was held March 18, on what would have been Cleveland’s 184th birthday.

Cleveland is the only president to have served two non-consecutive terms; the Democrat served from 1884-88 and from 1892-96.

Cleveland settled in Princeton after he left the White House in 1897. He purchased Westland at 15 Hodge Road and became involved in town matters. He became a trustee of Princeton University.

The wreath-laying ceremony, hosted by the U.S. Army Reserve’s 99th Readiness Division, is managed by the White House Military Office. The White House Military Office is responsible for coordinating the annual placement of presidential wreaths at tombs and resting places of former presidents and other famous Americans, and at certain memorials of historic significance.

Freda welcomed the small group. He said he was honored that Cleveland had chosen Princeton as his retirement home, and that it is an honor that the Princeton Cemetery was chosen as his final resting place.

During the ceremony, musician/soldiers from the 78th Army Band, part of the 99th Readiness Division, played the national anthem and “Taps.”

Maj. Gen. Mark Palzer, the 99th Readiness Division’s commanding general, said one of Cleveland’s greatest accomplishments was welcoming the placement of the Statue of Liberty in 1886, commemorating the centennial of the United States of America.

“During the dedication ceremony, President Cleveland said, ‘We will not forget that Liberty has made her home here, nor shall her chosen alter be neglected. Willing votaries will constantly keep alive its fires,’ ” Palzer said.

Those “willing votaries” at the 2 million-plus Active, Guard and Reserve soldiers, sailors, airmen, Marines and government civilians, he said.

The Statue of Liberty is a symbol that is inspirational, and that shows that the United States is worth fighting for, Palzer said. Americans, both civilian and military, fight for American ideals. America breeds patriotism, he said.

“The Statue of Liberty will endure not just because of its physical presence, but because it evokes the spirit of freedom and liberty, which makes us Americans. May she forever hold her flame aloft,” Palzer said.